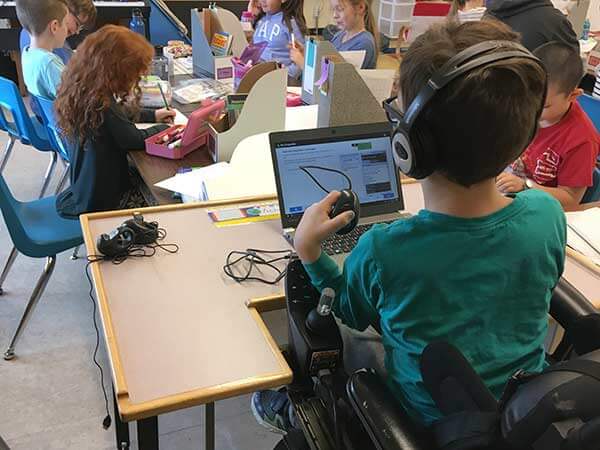 Asher is a bright, attentive and social student at View Royal Elementary School in SD #61, Victoria. Asher loves to read and reads well, loves to be with his friends, likes music, loves Garage Band on his iPad and participates in the school choir. He also has a new interest in playing soccer with the help of his power wheelchair. Asher clearly has so much to contribute to the active excitement of his Grade 3 classroom that his team has been committed to finding a technology-based solution to facilitate his inclusion in all school (and social) activities.

Asher’s team has worked hard to explore a number of access supports to help him show-what-he knows. Before the school year had even started, the team had determined a series of 21 day short terms loans they would trial with Asher come September 2017. As direct selection using his fingers to keypad is inhibited due to the effects of Cerebral Palsy, the team has explored various alternate access methods including speech-to-text, adaptive trackballs, joysticks, mice, and compared these on the both the Mac and PC operating systems as they explored their built-in accessibility options. The team has attempted using an iPad with different apps and adapted scissors among others ideas to support his ability to participate in all class activities.

As the need to keep pace escalates as he matures, Asher’s team is looking for a robust and effective technology support that will enhance his independence in keeping pace with curricular expectations. Working with a SET-BC Tier 3 consultant, Asher’s team has found that a finger trackball with onscreen keyboard has been a good fit for Asher to independently navigate the laptop and is currently exploring speech-to-text as an alternate access.

Having used the voice typing feature in Google Docs and having it successfully recognize his voice, the team is now moving Asher through the Dragon Naturally Speaking (DNS) tutorials to allow him further access and control of his laptop with this alternate way of providing laptop commands. Asher demonstrated his impressive reading and response ability when completing the DNS tutorial, easily maneuvering though menus and activities using a combination of voice and mouse commands to demonstrate his increasing confidence with the software.

Accessing digital and alternative format books, so Asher can turn the pages of book is the next step for the team. They are setting him up with access to ARC-BC, the Accessible Resource Centre – British Columbia, so he can access the curricular materials to support his learning and interests.

Watch out Grade 4, Asher is set to fly with the help of new technology tools! 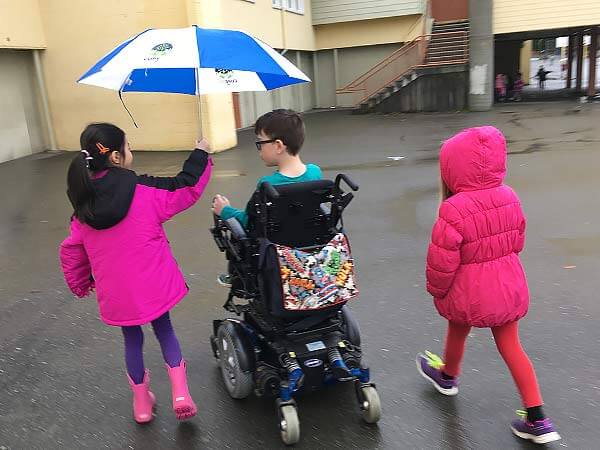 A Work in Progress!