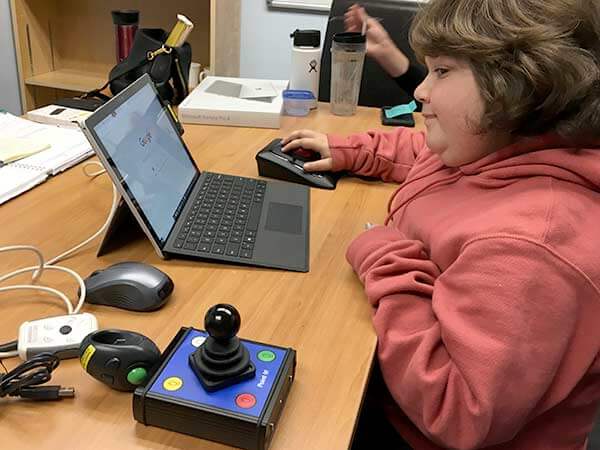 Dacian is an accessibility activist and is passionate about raising awareness about this topic. He is involved in a Youth Leadership group through Community Living Victoria, and through them has led discussions in various schools to increase awareness around accessibility. Dacian is adept with technology and is naturally gifted when it comes to using it. He finds it intuitive to use, and views it as a powerful tool to engage with others. Early in October 2018 through SET-BC, Dacian was able to trial an array of alternative computer input options to support the growing demands of high school. Dacian has Muscular Dystrophy, so he was looking for a solution that allowed him to conserve energy, without sacrificing on the volume of work he was able to complete.

Dacian’s dedicated school team, which includes an Occupational Therapist, Integration Teacher and SET-BC District Partner, met with their SET-BC consultant Carla in the spring to request services and complete a Collaborative Action Plan. Their organized approach as a district and a school based team facilitated a quick start to the year, and an early shipment of trial items at the start of the 2018-19 school year. Being able to work independently was a big goal for Dacian, and not having to rely on an EA to scribe for him was important to the whole team. The school set up several computer access locations for Dacian. These were expensive and not portable or flexible if he needed to move to another location. The team was looking for supports that would conserve energy, facilitate written output in an effective and efficient manner, and increase access to class materials, in all locations of the school.

Dacian’s creative and easy going nature was evident during the trial process. He came up with a rating system using the Surface Pro that he was trialing with different mouse and keyboard inputs. Dacian used the sketchpad to rate items on a 1 to 10 scale, and would provide verbal explanation as to why it met that number rating. For example, he gave the Point-It! Joystick 9/10 for ‘fun factor’ as it looked like a gaming control, however gave it a practicality rating of 0/10, stating that the profile was too high, causing wrist pain. Additionally accessing the left/right click buttons had to be done through his other hand which was inefficient.

Dacian also assessed the usability of different keyboards that ranged in size from handheld options to mini keyboards, and ones with large mechanical keys and soft membrane keyboards. Dacian had fun with the trial and very much appreciated the time to test alternate input options. He found the information he received from the SET-BC consultant about the differences in the technology such as custom programming ability, the force required to use it, and adjustability options beneficial in making an informed choice.

Dacian decided on a Surface Pro tablet and keyboard, with a BJOY Hand C joystick. This setup allows Dacian to access the computer in multiple ways; either through the touch screen, the joystick or the trackpad on the keyboard. The handheld joystick allows for flexible positioning, and he is able to customize the speed of the pointer movement as well as the function of the 4 buttons on the device (left click, right click, click and drag), that best suits his movement needs. Having multiple means of access allows Dacian to use different movements, when certain muscles tire. To interact with the curriculum, Dacian used district based GSuite tools such as Google Classroom and Google Docs. Additionally, Dragon Naturally Speaking was provided by SET-BC to facilitate dictation, as a way to represent his knowledge, but also to be used as means to control the desktop with his voice (meaning a complete hands free option to computer access).

This portable and lightweight set-up has allowed Dacian to complete his work in multiple locations around the school. Dacian has noticed that overall his arms and hands feel less tired and he is not as reliant on his EA to scribe for him. Dacian is more independent with his writing. He can now notate on his class worksheets and materials directly in the Google Classrooms which saves energy as he not retyping/writing content. In the classroom, Dacian’s teachers are noticing he is in control of his learning and have seen an increase in his independence. Dacian is focused on maintaining his school grades, and keeping up with the curriculum in order to graduate. He plans to explore Dragon Naturally Speaking in further detail to help him further conserve energy.

Dacian helped co-author this article. A big shout out to him! 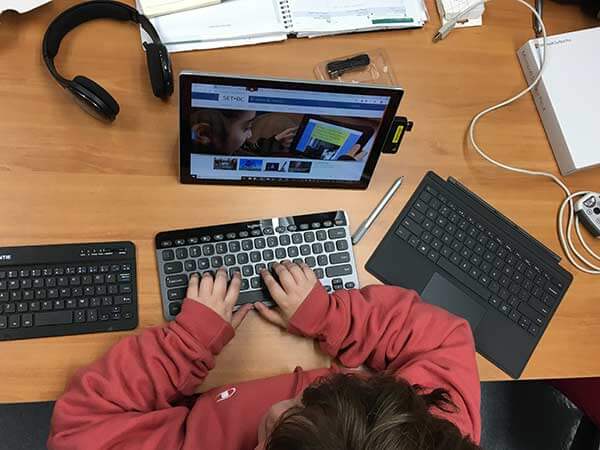 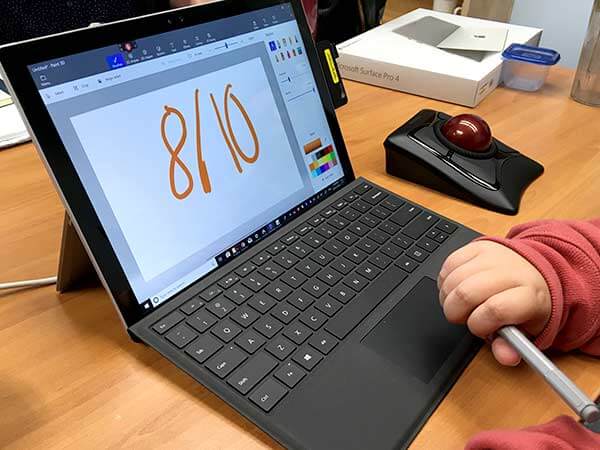